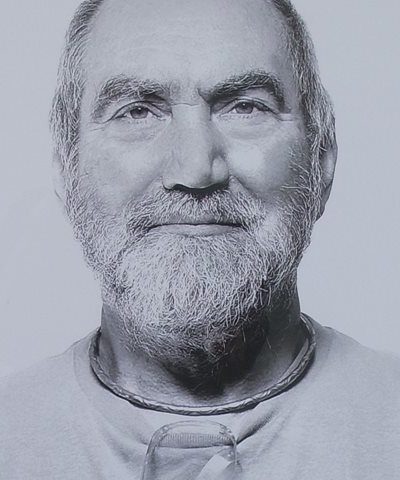 Richard Quinnell is an award-winning  British blacksmith with an international reputation.

He has produced some of the most important ironwork of the twentieth century, including the gates to Shakespeare’s Globe Theatre in London, the coat of arms for the British Embassy in Rome and the gates to the National Ornamental Metal Museum in Memphis, Tennessee. He founded the British Artist Blacksmiths Association in 1978 with his first wife Jinny, and they founded Fire and Iron Gallery in 1982. Following Jinny’s death in 1988 their daughter Lucy took over Fire and Iron. He founded the Quinnell School of Blacksmithing with his second wife Pauline in 1996.

He began restoring important historic ironwork in the 1960s, at a time when there were no ethical rules to guide him. By the 1980s, he was highly respected in his field of conservation and restoration, so much so that the Crafts Council invited him to sit on their conservation committee for a number of years. Richard has a long standing connection with the College and Herefordshire. He has held the role of external assessor for our Artist Blacksmithing course, and has curated exhibitions and organised conferences highlighting the excellence of blacksmithing across the region.

Richard has a long list of prestigious commissions to his name including Wren’s eight transept grilles at St Paul’s Cathedral in London. He has exhibited, curated, lectured and written about blacksmithing at an international level for over fifty years. Richard is a Freeman and Companion of the Worshipful Company of Blacksmiths has been awarded an MBE for his part in the revival of British Blacksmithing.