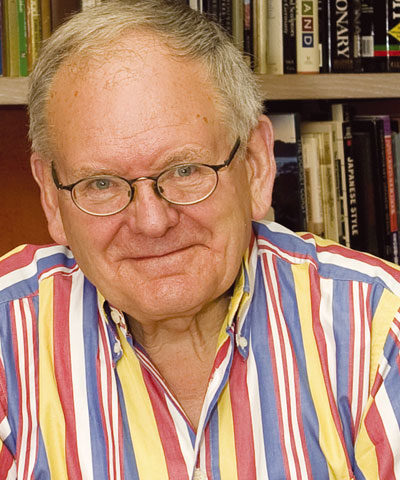 Fellowship from Hereford College of Arts in 2012.

John describes his career as an ‘adventure in wood’. He first saw furniture being made at the age of 11, and visited the great cabinet-makers in Copenhagen as a teenager. Rather than go to Oxford, he trained as a cabinet-maker. By the age of 22 his designs were being sold in Heals, Liberty’s and Harrods.

John travelled widely as a designer and maker, particularly in the United States. He was a founding member of the Crafts Council, and in 1976  bought Parnham House in Dorset to provide larger studios for his growing design practice, where he also set-up The Parnham Trust to provide courses for aspiring furniture-makers.
Between 1977 and 2001, the Trust educated a generation of designers and makers who have established successful businesses around the world. After 25 years, Parnham Trust amalgamated with the Architectural Association which now runs practical programmes for aspiring architects.

His furniture can be seen in exhibitions and galleries in the UK and abroad. In 2010 he received a Special Commendation from the Prince Philip Designers Prize and in 2011 a 50 year retrospective of his work, supported by the Arts Council, toured the UK. He was awarded an OBE in 1988 for services to furniture design and in 2002 received the American Furniture Society’s Award of Distinction.

To a generation of makers and craft students he is simply known as “the father of British furniture design”.