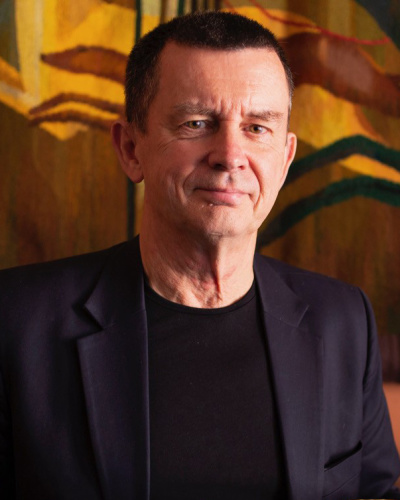 Phil Cleaver is a graphic designer, artist, author and a Professor in the Creative Industries. He is also a multi-award winning graphic designer who is known for seeing things differently.

He has been described (amongst other things), as one of England’s most eminent graphic designers. A protégé of Anthony Froshaug, he honed his typographic skills under Alan Fletcher at Pentagram, Wim Crouwel at Total Design in Holland, and Michael Wolf at Wolff Olins.  In 1984, Allied International Designers recruited Phil as creative director of branding.  In 1987 he established Cleaver Landor, a specialist design consultancy, whose success led to such rapid growth that Phil found himself increasingly paper-pushing and decreasingly pencil-pushing, so he set up design consultancy et al, in 1992.

Phil’s reputation is such that his early typographical work is archived in St Bride’s Printing Library, and the books he designs are in the permanent collection of the Victoria and Albert Museum’s National Art Library.

Phil’s book, ‘What They Didn’t Teach You in Design School’, is an international best seller.  Now into its fourth printing, it has been translated into Chinese, Korean, Russian and Spanish.

“Turn off the head phones and the computer, and design with your imagination first. Fill your visual data banks, walk the streets. Go to a Museum. Go to an Art Gallery. Go to a flea market. Then design with your body and heart not your head, and remember like a child you are your most creative when you simply play”.