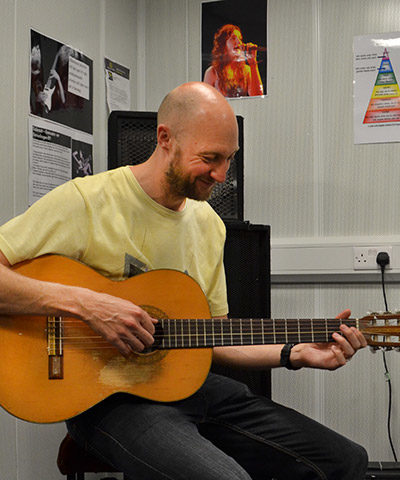 After leaving University, Leo worked as an assistant designer for a plastics specialist in London, alongside performing as a vocalist, keyboard player and guitarist with the Roots Manuva backing band. Since completing his masters, he has taught at Hackney Community College, the Brit School for Performing Arts and for Rising Tide at the Ocean Music Venue.

Leo has also worked as a sound engineer at the Premises recording studio in London and has produced releases featuring members of Mercury Prize nominees: Polar Bear, the Invisible and Roots Manuva (Mercury prize winners). His specialist areas are audio production, the music industry and group performance. He is particularly interested in the cross-over between these disciplines and the relationship between digital applications.

Leo has been teaching full-time at the College since 2008 and works predominately with first and second year music diploma students. He also supports students with external projects, which he sees as an essential part of their career development.

He continues to work as a music producer, vocalist and guitar player with folk-blues group – Librarian, acoustic trio – the Mores and electro-rock band – the Invisible. In the last few years he has released a seven inch vinyl with forte distribution, performed all over England and recorded at the RNB. To hear Leo’s work, visit his Soundcloud.