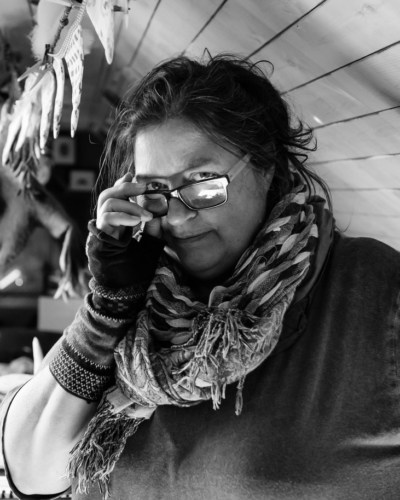 Jackie Morris was born in Birmingham in 1961. She grew up in Evesham and Broadway, where she dreamed of being an artist, and on leaving school attended Hereford College of art for her foundation year, moving to Bath Academy of art to complete a BA hons.

On leaving college a string of part time jobs, some more curious and some more fulfilling than others, kept the wolf from the door while she built up a professional portfolio working mostly in editorial, for Radio Time, New Statesman, New Internationalist, The Guardian and Independent as well as glossy magazines like Country Living. But her main love was in books, illustrating jackets and then moving into the world of children’s books. The world of part time work was left behind when, aged 27 she was commissioned to design eight cards for Paperlink.

She collaborated with writers, her first books being by Caroline Pitcher and Anita Ganeri, but moved into writing and her titles include the Seal Children, Can You See a Little Bear ( written by James Mayhew), The Ice Bear, Mrs Noah’s Pockets( illustrated by James Mayhew) and How The Whale Became written by Ted Hughes. Her latest book, The Lost Words is a collaboration with author Robert Macfarlane and has been described as a ‘phenomenon’ by The Guardian. The lost Words is an attempt to refocus young people and restore a sense of wonder in the natural and the non-human world around, a celebration of  every day wildness.