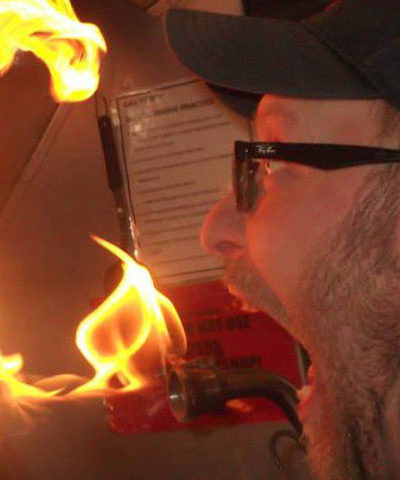 Working as a self-employed Artist Blacksmith for over 12 years from his forge in Kington, Herefordshire, Ian worked to private and public commission. Ian has wide experience creating decorative metalwork for galleries, large scale public sculptures, garden pieces, community artworks as well as running workshops for school children and mentoring students.

Referring to himself as a “Jack of all trades, master of some”, Ian also worked as a photographer, Film Projectionist and Gallery Technician for The Courtyard Centre for the Arts in Hereford for many years. As a photographer, Ian was involved with the digitising museum collections and in 2009 was lucky enough to be chosen to photograph a prestigious collection of Australian aboriginal artifacts at National Museums Liverpool.

Ian has worked at Hereford College of Arts as a technical demonstrator in the Small metals and 3D workshops since 2008. It is here that Ian has developed a new set of skills to pass on to our students particularly in low-tech photo acid etching, small-scale forging, wood turning and now laser cutting and etching.

Ian is an enthusiastic member of staff with a love of film and pop culture, classic minis and motorbikes, science fiction and fact, and quad skating. Ian lives in Herefordshire with his wife and two daughters.