This was a conference that reflected some different perspectives as well as pragmatic approaches to that interesting negotiation space between ‘technology’ and ‘learning; unsurprising since so much of the wider context is equally conflicted as the HE sector bobs around in a swirling maelstrom of change.  Overall, from my perspective, the conference was also about whether we want our technology to be a passive

This was a conference that reflected some different perspectives as well as pragmatic approaches to that interesting negotiation space between ‘technology’ and ‘learning; unsurprising since so much of the wider context is equally conflicted as the HE sector bobs around in a swirling maelstrom of change.

Overall, from my perspective, the conference was also about whether we want our technology to be a passive ‘enabler’ that we buy in ‘for people’, something we genuinely co-create, or something that we adopt a half-way house with by framing it in such a way that our communities feel they have informed the choices made. Feel they have ‘buy-in’.

And, as at other conferences, I picked up a mixture of pragmatic advice that has the potential to be really helpful  (thumbs up to signposting your students to moodle course that will both support their areas of practice and support them with developing the skills to become lifelong learners), advice that is less helpful for a college of HCA’s specialist context and scale (difficult to see how digital note-taking would work in the metal-bending heat of a forge environment however great the software is) and more intangible questions and thoughts around the particular ways we see technology in general and how the types of technology we use changes our ideas around knowledge.

I missed the keynote and welcome, due to storms the night before disrupting travel, but I made it for the key supporter session, which was pleasantly light-handed around the sponsorship of the particular VLE platform and useful around sharing the University of Wolverhampton’s advice around how to implement a new VLE in a positive manner. Lots of consultation (unsurprising), VLE ‘retreats’ (inspired idea, even though they didn’t actually take people on a retreat), and it’s important to not talk about the VLE but consider instead broader ideas of learning needs.

This is particularly useful for us at HCA as we’re in the early stages of developing a new college strategy and the digital is part of that. We have the possibility of doing something exciting. So, if there’s a flaw, it’s that in considering the VLE as a thing in itself perhaps this denies more imaginative possibilities. And ‘VLE’ is flawed as a concept. Isn’t the whole world a virtual learning environment now? And I still would love to see our students taught to code. I’m going to investigate Domain of One’s Own, arts college specialism or no.

(Imagine STEAM (Science, technology, arts, maths). A steampunk VLE created by Level 3 GNVQ music and art students, rolled out to B.A (Hons) crafts students. I am not sure that this will happen. But I can dream)

We heard from Annabeth Robinson from Salford. I loved her virtual landscapes and here is a clear link between creative and science; fieldwork from the lab, learning how to risk in a low-stakes way so that fieldwork is more valuable. Again, as a small crafts college I can’t see how this might be for us, but for any of my colleagues in the big FECS, or arts in the big HEI, this kind of collaboration is a match-made on all the levels, through prosaic to inspiring.

However, my favourite speaker had to be Chrissi Nerantzi, who was inspiring. She talked of technology as community-led, as connected, as open, as a tool to be used for the public good. She quoted from Friere. I was probably aligned to her ideologies already before her presentation, but it’s also good to see the tools she’s developed and her particular articulation of a highly complex context. From my perspective she was a critical voice in the dominant conversations around technology, orienting us towards technology as a tool; stressing the importance of people, partnership working, a process rather than a product.

Again, I was reminded of different voices in this conference. On the one hand technology and business –  being low-key, enabling, but still kind of being in ‘charge’ for those who choose to purchase it. Then the more open idea that technology is about people, about creativity, about shared solutions. Of course, perhaps it’s about both. Or it’s maybe more about knowledge of all types being a big unformed nebulous thing that moves and can’t be second-guessed, or controlled by commerce or movements

And, this conference made me think of that. Someone had commissioned this map, had paid for it. But the map itself was all about conversations and how we see the world. About networks and the different ways our individual contexts create representations and geographies.

A very wise man I know mentioned collective ideas of medieval knowledge today in an email about something totally different. But, I think that ‘shared collective wisdom’ is particularly resonant here in the world of technology, and it was good to see knowledge shared; particularly by Sheila MacNeill signposting us to futures-forecasters such as Audrey Watters and innovating pedagogies (which by coincidence I’d just found myself and will use to frame re_fabricate, the ‘open’ teaching space Victoria Powell and myself are setting up at HCA). Sheila also signposted us to the association for learning technology, which I’ve promptly joined. I’d met Sheila through @virtuallyconnecting and it was so lovely to meet her in person.

Plus, Sheila isn’t afraid of complexity, and brought in the much-needed thoughts around the key enablers are for technology – and that these are people, not products, or process.

Peter Bryant’s case study from LSE built on this; his open considerations of how we work with people to support change were both insightful and practically useful. This could have been a super-celebratory case study; he showed us very positive and inspiring outcomes of students communicating nuanced ideas in super-interesting, vibrant ways which wouldn’t have been possible without the digital –  but it was also critical – I found his points in the Q & A about the importance of sharing failure as well as success particularly resonant.

Next, we heard from Dr. Chavan Kissoon and Dr. Mark Smith, who worked with Jisc to support digital learning at the University of Lincoln. This sounded like a long-term, layered project which has had the capacity to explore student and staff co-created ideas, and something certainly worth exploring post-conference in more detail. I missed the link to their presentation but the conference organisers, Inside Government, will hopefully forward all presentations to delegates next week.

The two final presentations again dealt with large, long-term projects. Dr. Fiona Handley and Fiona Macneil from Brighton showed us the various twists and turns visualisations of digital literacy move between as our context changes. Dr. Stathis Konstantinidis showed us HELM – a community using collaborative, participatory design principles to create a range of pedagogic resources which support wider communities in understanding difficult concepts. Although at first glance this seems like too ‘big’ a topic to really impact on Hereford College of Arts – and, indeed, we don’t have the infrastructure or funding to really investigate community and digital on this scale – it’s still relevant, for the design principles and for showing us how digital technology is not always a bought-in ‘enabler’ of practice, but supports co-creation of knowledge through genuine community action. For me, this presentation was all about process, and I wonder how far as a small community in Hereford we will be able to determine our own process, due to our scale and specialism. Perhaps commerce can be an enabler of process, rather than product? But I would still hold by the importance of people in determining both.

So, much to take away. I hope I’ll be able to take some of the ideas and information to different conversations within my own academic community in Hereford, and also further in different ways. I met the amazing Maren Deepwell, for example, and I am excited at joining in the conversation with the @A_L_T community in 2018. 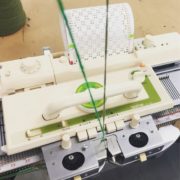 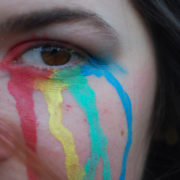