War and Art in Northern Denmark

A great ‘Creative Lunch’ yesterday with Alex Thimm presenting and explaining his current  photographic work. Alex’s current project seems to me to capture moments from multiple narrative ‘lines’ and the individual images he showed us can be read within multiple contexts, each context bringing a different meaning to the piece. Placed together the work explores ‘the

Alex’s current project seems to me to capture moments from multiple narrative ‘lines’ and the individual images he showed us can be read within multiple contexts, each context bringing a different meaning to the piece. Placed together the work explores ‘the dichotomy between areas of intense military  presence …and natural intactness and beauty’. It also forms a curation of information regarding a particular area’s cultural and historical complexities.

And the area in question is full of contradictions and fascinations. Alex has personal ties to a particular area of Northern Denmark – the Nordjylland, which his photographs portray as a land of deep and shifting contrasts, exemplified by the dichotomies in his title ‘War and Art’.

These contrasts work on multiple levels. One is cultural, investigating the space between working class fisherman who are the cultural ‘roots’  of the community and the middle class artist (Nordjylland is home to a well-established artistic community, begun at the start of the twentieth century).

This particular contrast is explored in photographs that show beaches captured in these romanticised paintings in their everyday ‘nowness’ – full of a party of schoolchildren who, as another narrative line intersects, are visiting monumental concrete ‘defences’ erected in the Second World War.

These eroding concrete edifices, often slipping into the sea or lying in a state of partial ruin develop another narrative, that of Denmark’s role in WW2 and, again, the contrast between the cultural marks of the everyday and the powerful metaphors buried in these massive manmade constructions.

And, moving inland, another intersecting story – that of the bunkers erected – not as part of German defences as one might suppose but post-war, by the Danish army. Alex considers these through presenting similarities and small differences as in the photograph below.

The particular geographic landscape is equally complex, holding ideas of erosion and continuity, captured by images of waves meeting each other as seas meet, and the rabjerg mile – a shifting dune, gradually moving across Nordjylland.

Alex feels that the landscape questions the photographer, and seeks to capture these multiple complexities within simple observations.

To me, the work defines and captures particular moments within a community, as well as exploring multiple intersecting narratives.

Thanks again to Alex for showing us his work. As many staff were busy interviewing prospective students, he has kindly agreed to reprise his talk later in the year. In the meantime, you can see more of his work on his website here. 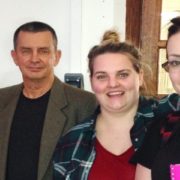