Huge thanks to the delegates, presenters, and the amazing cooking of Holland Otik which made the first HCA Festival of Practice such a success on the 18th July.  The aim of the festival was to create a less-formal scholarly space which enabled discussion around practice (pedagogic or discipline-specific).  For those unfamiliar with the term, ‘practice’ is,

Huge thanks to the delegates, presenters, and the amazing cooking of Holland Otik which made the first HCA Festival of Practice such a success on the 18th July.

The aim of the festival was to create a less-formal scholarly space which enabled discussion around practice (pedagogic or discipline-specific).

For those unfamiliar with the term, ‘practice’ is, in a sense, the ‘discipline’ of the vocational/professional world. It is a noun and a verb. As educators, we are also practitioners of our craft, and for craftspeople, artists and designers, their ‘discipline’ will also be their professional practice. In the case of dual professionals such as those found in the arts college, this will be both education and discipline.

Therefore, it came as no surprise to have a diverse range of speakers on the programme. The session was opened by HE Manager and Course Leader for Artist Blacksmiths  Del Done. We were lucky to have Del share her pedagogical practice, which she first spoke about at an international blacksmithing conference in the summer of 2016. Del has built on the work of Dr Natasha Mayo, taking a design heuristic and exploring it further – this is visualised diagrammatically in her presentation (slides will be uploaded shortly).

Her work is particularly interesting in terms of how it promotes students engagement with theory and practice; whilst creating and encouraging an iterative design practice that supports students in producing skillful, complex and meaningful visual outcomes.

The focus shifted to the particular and equally complex issues around Claire Anderson’s current research, which creates international collaborations through textiles, in this case between women working in Gaza and students in Scotland. Claire spoke of the complexity of mediating between cultures, at a large geographical distance. This was practice-as-research in action. The work has the opportunity to create exciting new designs as well as support social and economic outcomes for a community facing particular challenges.

Gillian Hipp was then kind enough to sketch out some of her early research that forms part of her PhD study at the University of Worcester. With aerial dancing as her background, Gillian’s work looks at Labanian movement analysis – but with a particular focus on health in the workplace. Her aim is to create exercises for those in jobs which demand long hours at a keyboard; to create an embedded and holistic way of healthy movement ‘in’ the environment rather than the usual interventions, which take place outside the office itself. I, for one, really hope she is successful in her research and we were all willing to support her work if she needs trial subjects within HCA.

By contrast, Innes Jones spoke with an emphasis very much on teaching and learning; more precisely, how to support students by creating innovative new models for academic modules. Most arts colleges have a ‘Critical and contextual studies’ or ‘Visual communication’ aspect as an academic underpinning to their course. Here at HCA, this is delivered by studio tutors during the first year, and the first assignment does not have to be an essay but can have a visually communicated assessment outcome. Innes encourages his students to create an infographic; this supports both their graphic design skills on particular programmes and their critical thinking skills for practice in context. His discussion also showed us how it supports students to gain confidence in their ability to undertake academic practice; and learn gently how to master ‘academic’ techniques such as referencing.

Following an amazing, inclusive vegetarian lunch provided by Holland, who somehow manages to combine a career as academic tutor, creative tutor, creative arts practitioner and entrepreneurial caterer, Victoria Powell’s discussion as to how padlet might be used to support critical practice and conversations outside of the lecture theatre was very exciting. We hope that she will return to explore these ideas in more depth in a further workshop. Victoria also deserves  a shout-out as a valued participator  in post-presentation discussion – I really hope that HCA can explore how to develop some of her ideas further beyond this one-day event.

One such idea was that Celia Johnson’s work using night walks to explore critical feminist perspectives and other site-specific  responses (such as her work at the crumbling Rotherwas munitions factory and at The Rodd) might be further explored with lectures which considered theories which spoke to Celia’s practice. This could be a very exciting day and I hope we will be able to discuss this in the new term.

Another presentation which needed more time was Alex Thimm’s knowledge-exchange around the documentary photograph and the importance of fully understanding the historical context and perhaps imploding a false myth of the documentary photographer as narrator rather than critical commentator. One of the real advantages of working in a college which encourages participation in external conferences is that we can all benefit from our colleagues CPD. Alex has kindly agreed to host a separate event to discuss these ideas further in the new term.

Last, but by no means least, on what was a fast-paced day packed full of ideas was Neil Hadfield’s presentation around that most interesting and exquisite form of illustration…the postage stamp. Neil is a great storyteller and the perfect person to end our first ever Festival, by transporting us back to the very origins of the postage stamp and telling a history of, not only his own childhood fascination with stamps and what they reveal about a culture, but how they represent a wider zeitgeist. And, of course, a presentation full of colour, narrative, detail and wit.

From my perspective, as organiser, the day went better than I ever could have hoped. We have various strands to carry forward and it started many debates and interesting discussion of all strands of practice. I have had lots of positive feedback and we will look to holding a further festival, but perhaps this time slightly closer to Easter, as the end of term is so hectic. Again, thanks to all involved. I look forward to Festival of Practice 2 and all the other conversations in between.

Scholarship in action at the AoC HE Research and Scholarship Conference 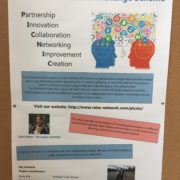