We have some great news. Alongside our three current students who have been selected to exhibit at the forthcoming Transition Exhibition as part of the Ypres 2016 event, we also have two graduates selected; Christian Vaughan Jones and Dan Moss. Transition is a major international exhibition of contemporary forged metal design that will be held

We have some great news. Alongside our three current students who have been selected to exhibit at the forthcoming Transition Exhibition as part of the Ypres 2016 event, we also have two graduates selected; Christian Vaughan Jones and Dan Moss.

Transition is a major international exhibition of contemporary forged metal design that will be held at Kazematten, a first-class gallery space close to the iconic Menin Gate. In order to maximise the accessibility of the exhibition, the international selection jury has invited applicants to interpret the notion of ‘transition’ in its broadest sense; not only that from peace to war to peace, but also the transitions in the human, social, political, technological and physical landscapes that the conflict brought about in the post-war world.

Following the event, the exhibition will tour around various locations within the UK and mainland Europe and will be timed to culminate at a major London venue as part of the celebrations of the centenary of the Armistice in 2018.

In this blog, we celebrate Christian’s success and find out more about the sculptural work that he has designed and is currently making for the exhibition.

In his exhibition proposal Christian writes:

“Working with two different materials that react to force in completely opposite ways presents a challenge; it challenges my mind, my body and my spirit.
My mind deals with the how and the why, my body adapts to the unique requirements of each material and my spirit connects with both through respect and understanding for how each responds to manipulation. Hot forging metal allows the material to move by exerting heat and force, through physical interaction one becomes aware of the plasticity of metal, a dynamic encounter with the unique properties of hot metal transformed by each hammer blow only to return to its original state but in a new shape, the process of metamorphosis repeated until the final form is realized.

Stone on the other hand is less compliant when trying to impart form to the material; its rigidity causes fractures when force is exerted. For me this is the allure of this material, it involves a certain amount of jeopardy and unlike metal it resists movement. The brutality of splitting stone and the control needed to carve stone are at opposite ends of the scale of force, but both require impact to change the shape of the material, although unlike metal the state never changes. The resistance can’t be altered and it is this resistance that I want to capture, the moment of impact when the stone is cleaved in two, retained under tension within a framework of pins, wedges and tie rods. The release of energy within the stone is revealed as a crack, a record of the moment of transition, from an unremarkable stone to an object that monumentalizes change and celebrates the spirit of renewal.

Divided by force and brutality, rebuilt with passion and ingenuity, dealing with separation and unity and the transition between one state and shape to another, the final outcome is an object that has the potential to transcend the boundaries of art to become a future relic in its own right. A monument to change that pays homage to the skills of the Stonemason and the Blacksmith.” 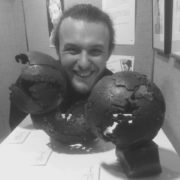