Each year students from Northern Ireland come over to study at HCA. We have two Irish students on the BA (Hons) Fine Art Top-Up course this year, Chris Donnell (pictured above, left) and Damian Walsh (right). Chris and Damian are both looking at conflict, drawing from their own experiences to inform their work. Being on

Each year students from Northern Ireland come over to study at HCA. We have two Irish students on the BA (Hons) Fine Art Top-Up course this year, Chris Donnell (pictured above, left) and Damian Walsh (right).

Chris and Damian are both looking at conflict, drawing from their own experiences to inform their work. Being on the course with them has made an impression on the rest of us in the third year. It’s an amazing insight and (call me over-emotional,) I feel moved by the open and gentle way the guys share their experiences.

Chris has said from the beginning of the course that his work is about conflict all over the world, informed by his own experiences growing up in Northern Ireland. As his work has developed his focus remains steadfast to this end – it’s clear and striking.  A few months ago he made a very large drawing which was based on accounts of conflict in other war torn places including Gaza and Syria, as well as on his own experiences. The drawing became performative and immersive and the end result, whilst abstract in nature, seemed very much like the telling of a story.

But you can also see the work as beautiful and aesthetically pleasing, and Chris has decided that his work needs to shift to something that is more poignant – that shocks. Artists are free to create work that shocks others – it might purely for the sake of causing a reaction, in Chris’s case it is to highlight important political and humanitarian issues. He was talking about this decision recently – his realisation that he needed to shift from his own comfort zone and bring an element of shock in to his work in order to be true to the individuals whose lives are disrupted and destroyed by war.

Damian has been experimenting with a range of ideas and mediums and has condensed his ideas around stories. The Irish tradition of storytelling fits in well with his ideas and he is a great story teller himself. But what makes his work so raw and real is that he is sharing his father’s stories. His Dad has lived in the same part of his home town all his life and has experienced the day-to-day conflict and divisions of the two communities first hand. Damian asked his Dad to share some stories and within a few days a letter arrived telling of events that to us in mainland Britain are frightening and beyond the experiences of the majority but which to Damian, Chris and their families are everyday happenings. I’m really interested in how Damian has approached the history of the troubles – the simple act of letter writing. Letters from father to son that are so personal and revealing and yet constitute historical fact and social reality. Damian’s work responds to these letters and is constantly developing and changing.

Reading this you might think “Yeah well we all know about Northern Ireland – what more is there to know?” Chris and Damian come from either sides of the political and religious divide but many of their experiences growing up have been so similar. As children they were both told “Don’t go down that street; you can’t be friends with that boy.” These were the kind of limitations that they grew up with and had to make sense of.  As adults they are both very aware of the everyday divisions that are perpetuated in their communities. They both believe that their country would be a better, stronger nation if people would work in peace and are making work that they hope will communicate the futility of conflict and reflect the humility and hope shown by those caught up in it.

You will be able to see Chris and Damian’s work at the HCA Summer Show Show from 13th to 20th June at the College Road Campus. 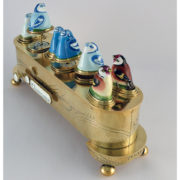 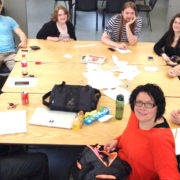