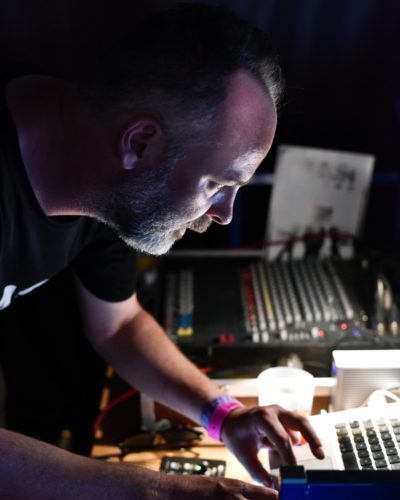 Nick Joined HCA in 2005, and works in the IT department as a Technical Demonstrator Specialist focusing on moving image, digital audio and screen based media.

After studying Art & Design here at HCA in 1992 Nick went on to work in the music industry as a musician and live music promoter based in Cardiff, booking bands for St David’s Hall and other venues throughout the city. Then followed a few years as the production manager and in-house graphic designer for JazzUK, a national music magazine based in London with a circulation of 30,000. Nick still works as a freelance graphic designer today.

Nick runs a visual arts company called MASH Cinema with his brother Dan (an ex-lecturer here at HCA) MASH Cinema promote art, film and music through their events nationally and internationally. They have gained recognition for visual performances working with artists, musicians and DJs at events, clubs and festivals throughout Europe. MASH Cinema work with film, animation, graphics and typography, mixing digital and traditional techniques to create live visuals and cinematic audiovisual performances.

Nick is also a resident VJ at Freerotation audio / visual festival, he also has many years of experience as a freelance film maker / animator, working with young people throughout Herefordshire.