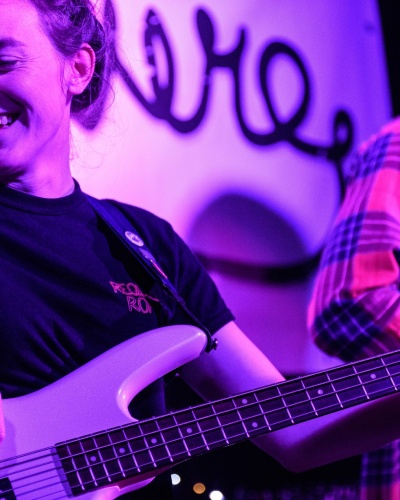 Stevie has been a part of Hereford College of Arts since 2010 enrolling first as a FE music student, and then employed in 2013. As she has been with HCA for a number of years, she is fully involved with all aspects of life at HCA and brings a positive energy to the creative environment. She was also elected by the FE staff as Staff Governor in July 2018.

Stevie core values as a teacher at HCA are pushing to help nurture/inspire young people to reach their potential and in many cases pursue their own careers within the music industry.

Alongside her role in education at HCA Stevie is a professional musician operating within a wide range of contexts including music workshopping, music promotion, theatre and show work, as well as performing and gigging as a bass guitarist within her own right.

She is currently a performing bass player in two live gigging bands; Sundown Jazz Society, a 7 piece original Jazz ensemble, and MammaFunk, a 4 piece function band. Both of these bands work within the ever-changing industry through a range of practical contexts.  Alongside these bands Stevie has been employed as a session musician for a number of blues-rock ensembles as well a player in Bristol’s experimental music scene.

With a keen devotion to live performance Stevie runs a promotional company called Power-Up Promotions. The aim of this company is to support the Hereford music scene to see the return of 16+ music nights and give our young musicians a platform to perform. Many HCA students get the opportunity to perform these nights.