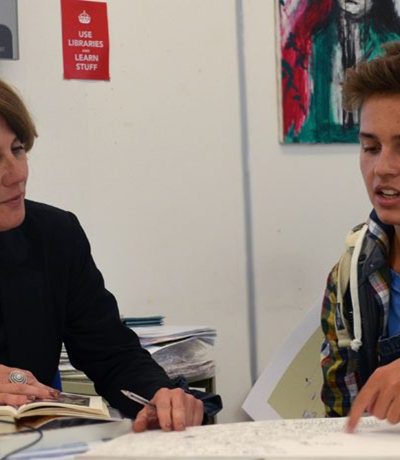 After completing a Fine Art degree at Maidstone College of Art, Mandy set up a studio as part of the Metropolitan Wharf collective in London and taught part-time at Chelsea School of Art. She moved to Wales in 1991 and has lectured part-time at HCA, University of Gloucestershire and University of Hertfordshire.

Mandy practised as a painter and printmaker for many years. She worked mainly from the landscape, often in Ireland where she happily co-existed with inspirational locals and hitched rides at dawn to join turf cutters in remote locations. Extending her practice by using video media and wanting to explore humans relating to each other rather than nature, Mandy completed an MA in Fine Art at University of Wales, Cardiff in 2009. She also studied independently with the philosopher Ray Billington for eight years.

Mandy’s teaching practice is based on the belief that it is fundamentally important for students to feel confident about questioning themselves as well as the world they live in. The learning environment should be one where experimentation, expression and the development of visual language is possible, where students are supported to develop conceptually as well as practically.

She has worked on the Extended Diploma course delivering the fine art and photography elements, and now teaches on our Foundation Diploma in Art & Design.

Mandy had a one-woman show at Newport City Museum and Art Gallery in 2010, and her films have been shown at ‘On the box’ at Aberystwyth Arts Centre, Dinefwr Literature Festival and Trinity Saint David’s School of Creative Arts in Wales.