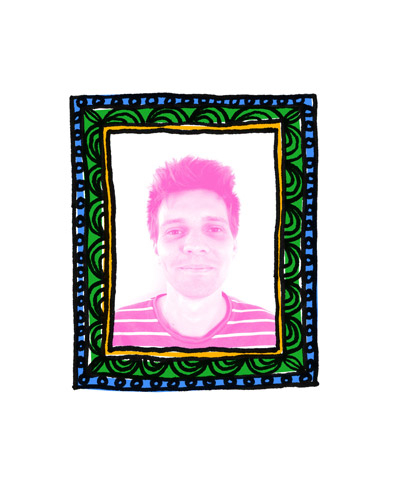 Max started at HCA on our Portfolio Course and graduated from our BA (Hons) Illustration course.

While studying at HCA, Max was shortlisted for the Penguin Random House Student Design Award. During his studies, and continuing since graduating, he has completed several commissions for children’s publication Anorak Magazine. Max made a book, My Friends, as his final major project at HCA which is also being published, and he has illustrated a book written by Nicola Davies called Bee Boy And The Moon Flowers – which she brought to the Illustration course at HCA especially so she could find someone here to illustrate it. As a result of his networking at the New Designers 2017 exhibition in London, Max was talent spotted, and has also been doing work for the card company, Moonpig. He is now writing and illustrating a series of books about the adventures of a cat and a dog from Wales called Ceri & Deri, which will be published in 2018.

Max’s success is down to a combination of his creativity, his hard work, and his dedication to illustration. When we asked him what advice he would give those applying to start their degree in autumn 2018, he said,

“Keep an open mind to everything – remember taking creative risks is a good idea. Listen to advice from your tutors – they have valuable suggestions. You have to be passionate about your chosen subject, because you’ll be doing it every day at college. Illustration suits me best, it has a clear purpose but also a total freedom. It also has a great sense of fun.”

I chose to go to HCA for many of the same reasons! It’s a small college, meaning more time with tutors, practitioners and other students. I’d wish every applicant to HCA the very best for their creative futures – whichever course they choose!”