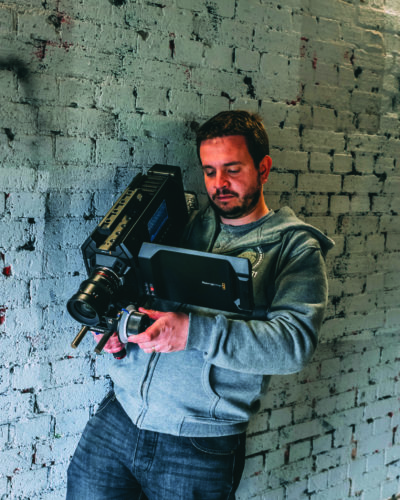 Why did you choose HCA for your degree?

I was a mature student so I had to hold a full time job whilst undertaking the course. At the time I wasn’t sure I would manage, but as well as being local and convenient, HCA helped me to achieve this balance. HCA  provides a short film course which is fairly unique, hands on and not entirely theory based, which is what I wanted.

In stepping into the professional world I have realised how much building a portfolio was really important – it has been looked at more times than I can count, and I now make a living as a filmmaker.

What did you love most about studying Short Film Making at HCA?

I loved the freedom it gave me to find who I am as a filmmaker. I was lucky enough to find my voice, and more importantly, a voice that people seem to like as I have been pretty successful in my practice so far.

There is always going to be somebody who is better than you technically, who knows more about your craft, but nobody has your specific experience, so there is always an opportunity to stand out.

What is the best thing about studying in Hereford?

I love that Hereford is so hungry for something different. There is an art scene in Hereford, and people love to try something a little different. If you offer something that is unique, people are willing to participate. I also love how welcoming and passionate Herefordians can be.

What advice would you offer students joining HCA?

I would say that if you are planning on qualifying and getting a BA or an MA you have to be prepared to work hard and go the extra mile. Don’t just be a passive passenger on your course, actively participate and build something for yourself.

What piece of work were you most proud of?

I would have to say Portrait(s) which was a horror film and selected for several international festivals. It was immensely successful, gaining awards in LA and Las Vegas, being nominated for best editing and best short in Cardiff, and even competing against a BAFTA nominated short film in a huge festival in Michigan, gaining Mike Coombes (another student) a best actor nomination along the way and being selected for a feature film anthology to be released on DVD and VOD this year.

What have you been up to since graduating?

Since Graduating I have been working on getting a new feature film made, and have also recently finished a new short film called ‘The Pit,’ which tells the story of a boxing champion and his father.

I have also started a new job as a videographer/filmmaker for a company in Newport called Sugarbox clinic, which means that I am now also making a regular living off my craft whilst preparing for my next project.

I have several things on at the moment, all of which I am truly excited about. I don’t know exactly what the future holds but I am pretty certain it is shaped like a feature film.