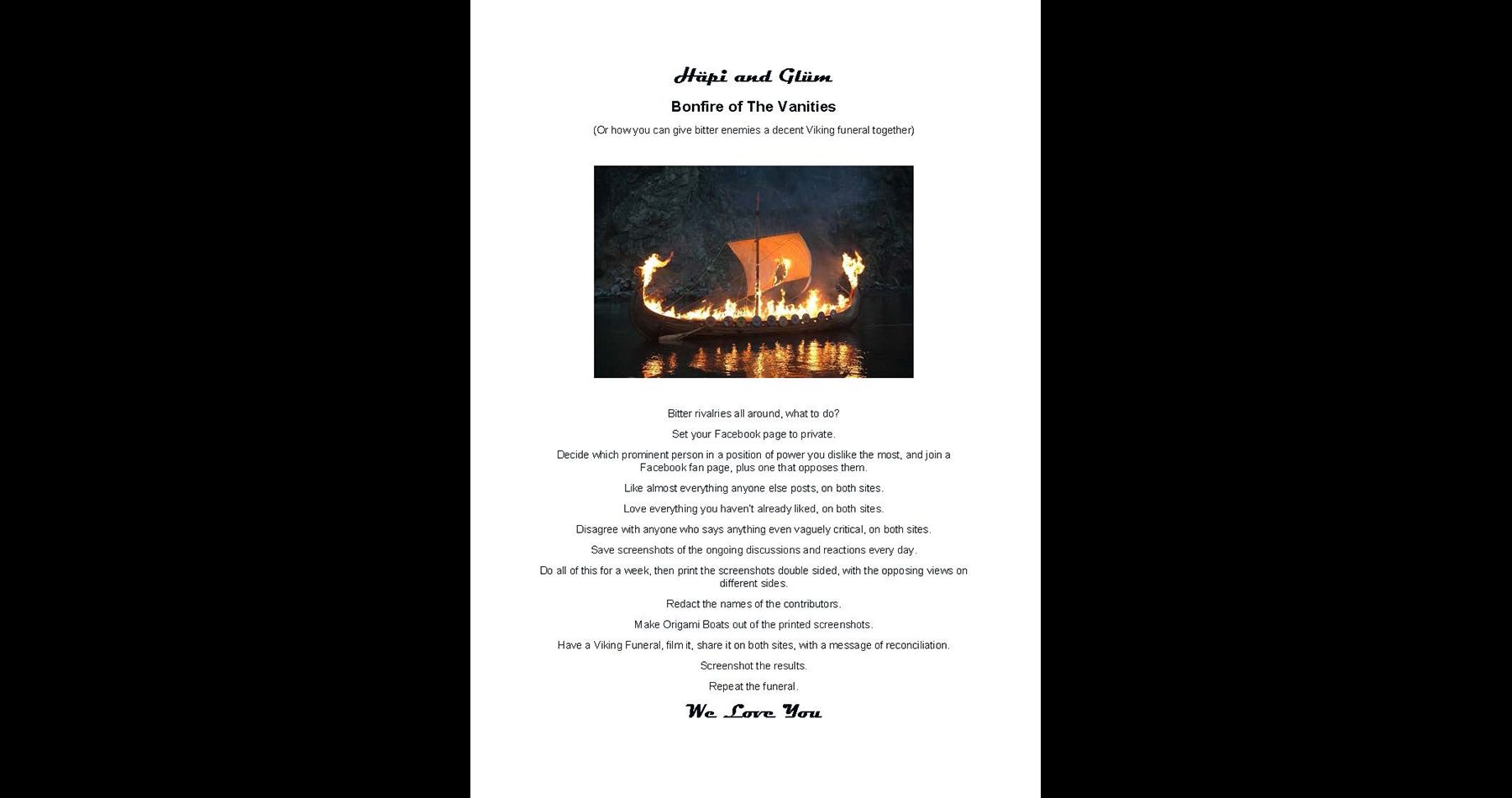 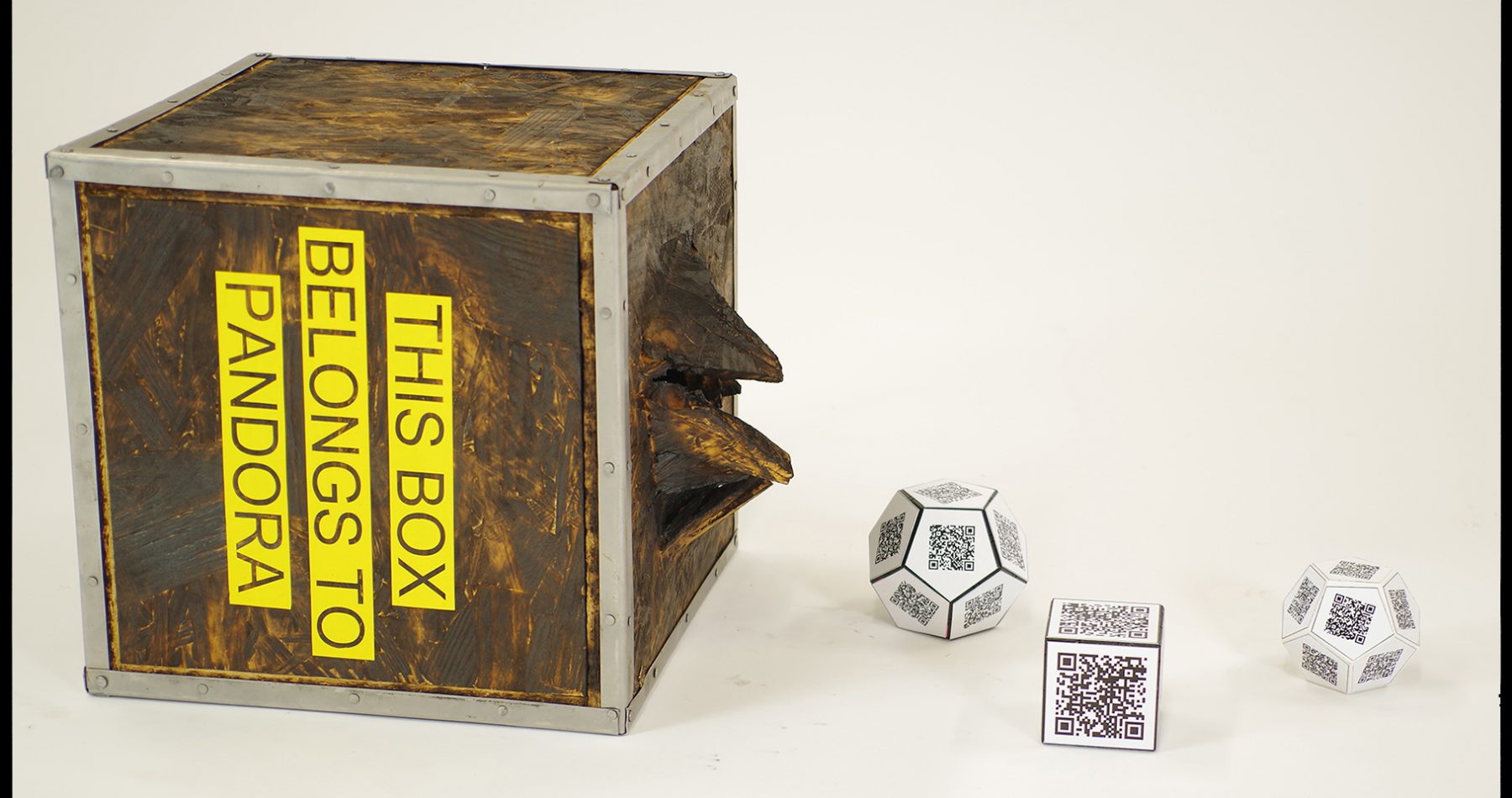 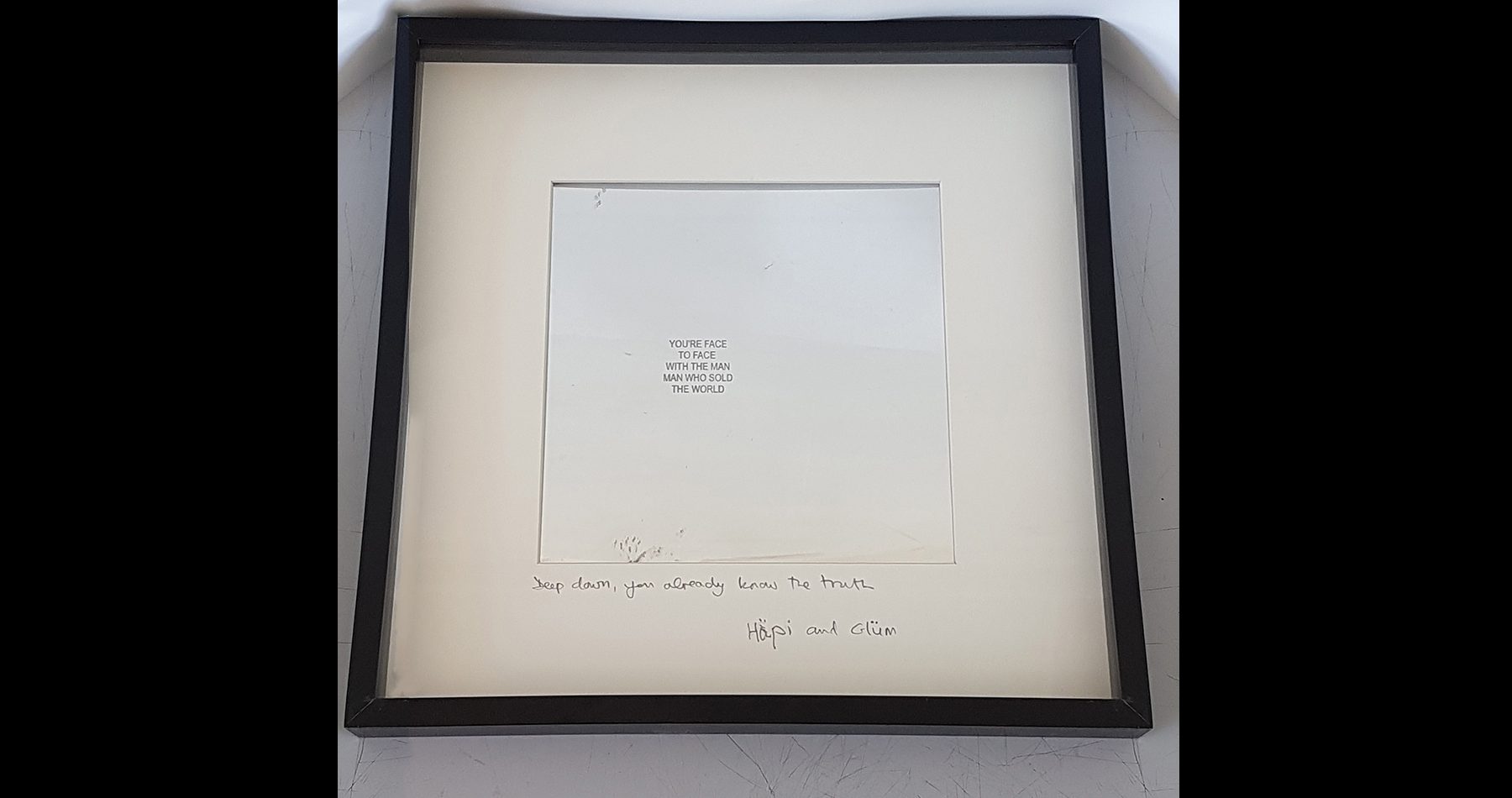 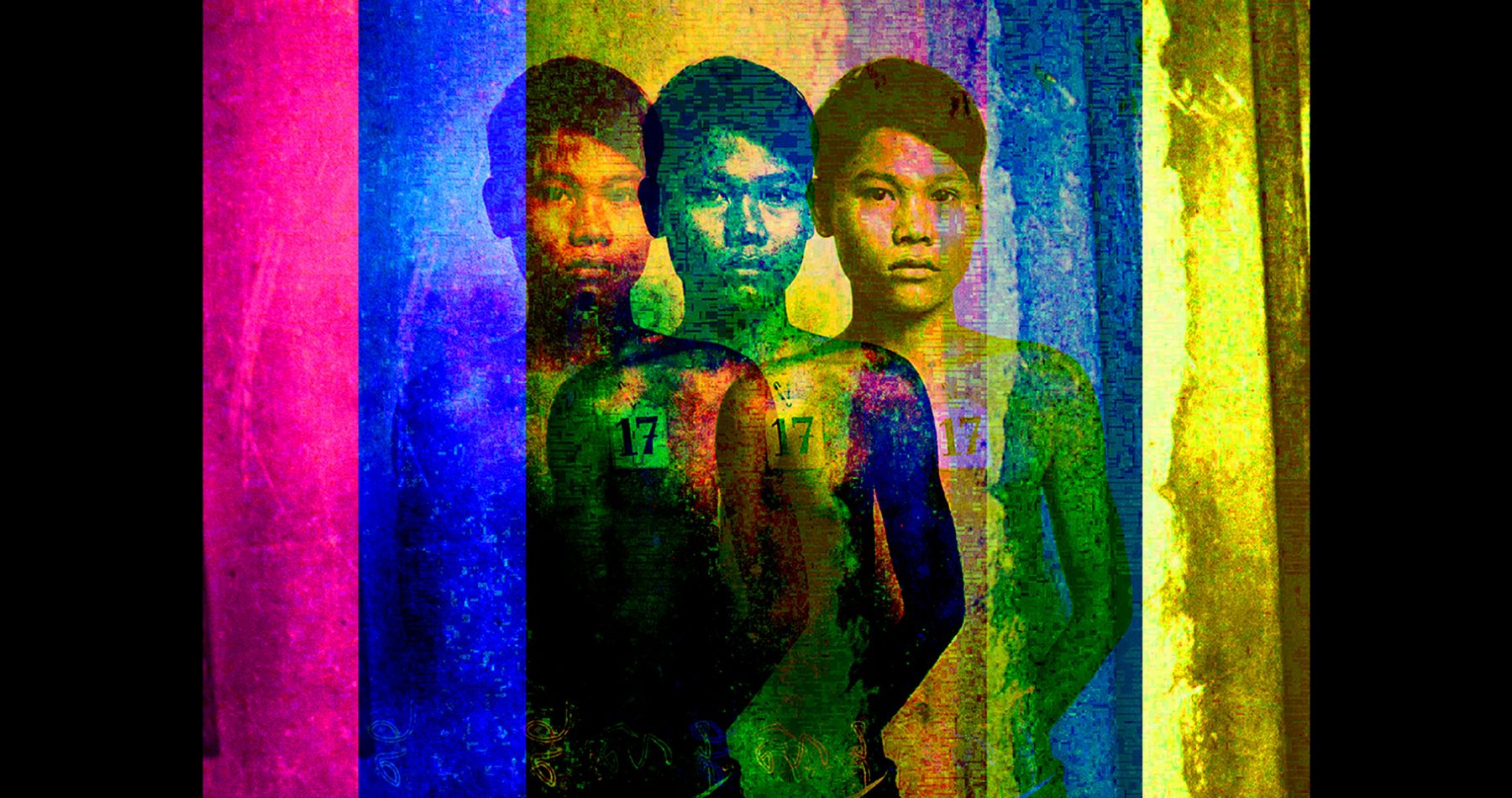 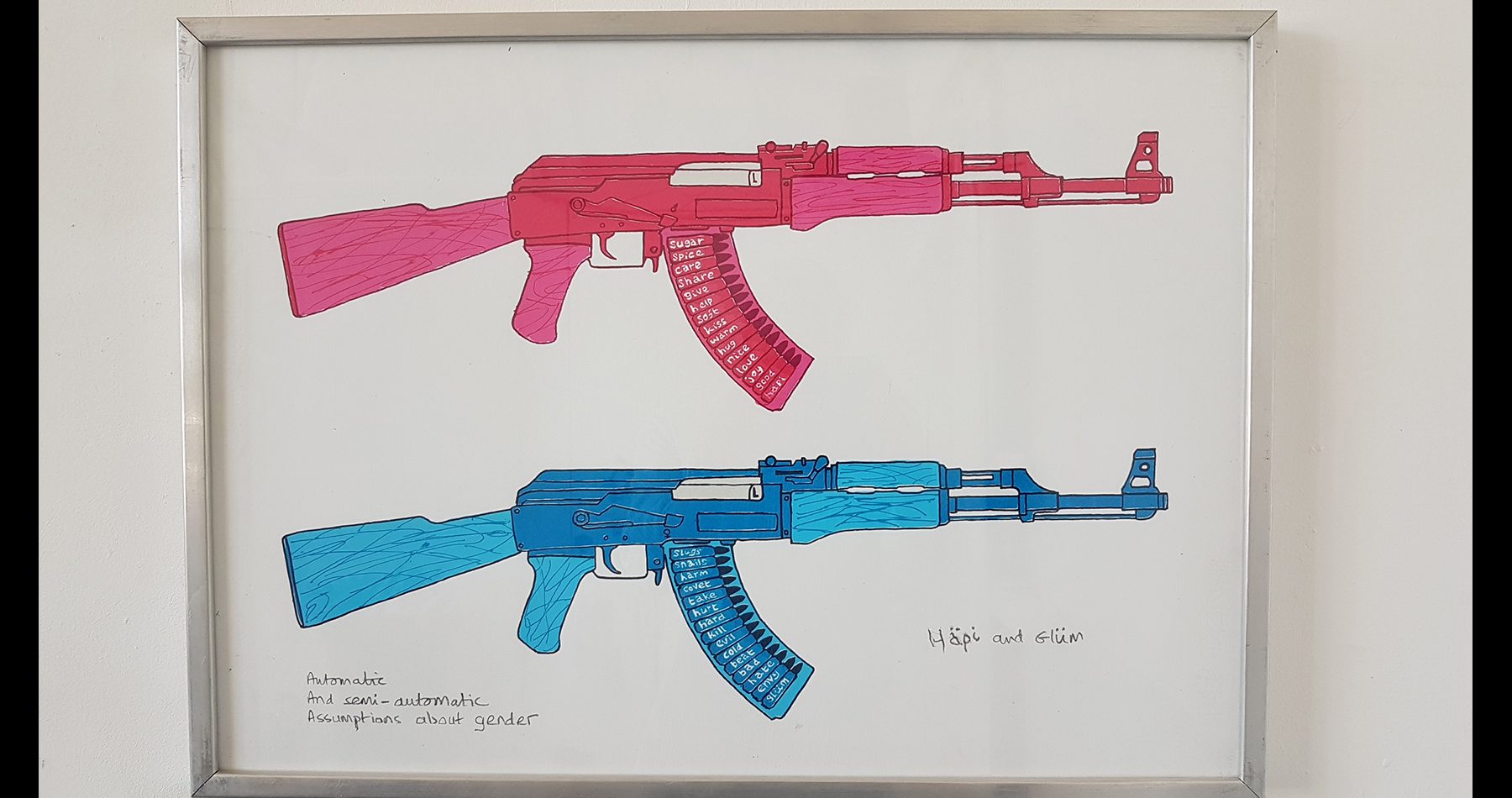 Inspired by a sense of fun, underpinned by hatred of injustice and bigotry, imaginary twins Häpi and Glüm explore the nuances of language, examine ambiguity, provoke the imagination, challenge prejudice, undermine convention and confront propaganda. They seek to engage with the audience and challenge them to look at themselves through the prism of art.

Inspired by artists from Goya to Warhol, Chapman Brothers to Shepard Fairey, their desire is to reject conformity, adopt the role of Court Jester or Sacred Clown, and follow the road not taken.

In this post truth world, Häpi and Glüm invite you to choose the lies you want to believe. Then question them.

Do It Instruction for a Viking Funeral. An instruction for the participant to see both sides of an argument, then reject them both.

Purge yourself of the delusion of thinking you’re in control. (Whatever was in Pandora’s box has now escaped, and after throwing one of the dice the participant is presented with a QR code accessing a YouTube video. It may be a music video, it may be a Gulf War WikiLeak. You have no control. Ages 18 and over).

Deep Down you Already Know The Truth. When peering into the mirror the viewer is confronted with a statement etched into it. Is it true? Are you sure?

The Worst Thing About This Picture Is? A printed, multi coloured, overlapping triple image, constructed from an open source monochrome photograph, asks the viewer a simple question. And how many answers are there to the question?

Automatic and semi-automatic assumptions about gender. Framed Screenprint, challenging exaggerated gender stereotypes. How much rings true, how much has changed?