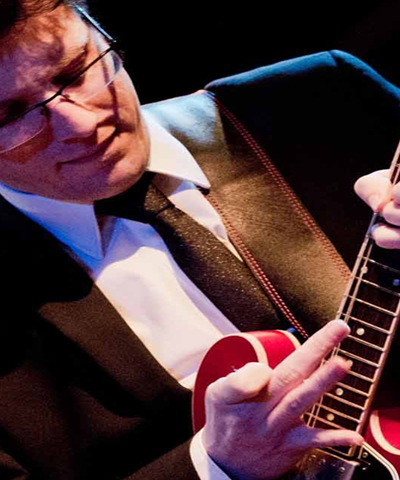 Biography
Lee Jones is a jazz-rock guitarist and composer, combining influences from modern jazz, fusion, blues, fingerstyle and rock styles. He regularly performs throughout the UK jazz scene and has recorded/performed alongside Larry Coryell, Martin Taylor and Dennis Rollins. Lee graduated from Birmingham Conservatoire in 2007 and has since released three solo albums, “Swish” (2007), “Songs from the 13th Hour” (2011), and “After the Pier” (2015) with former WEA producer Simon Tittley as featured on Jazz FM’s Discovery Show.

Teaching
Lee has experience of teaching in a wide range of contexts. He has held posts at Ludlow College, and Kidderminster College where he taught Guitar, improvisation and music theory.
At HCA Lee works on the Principal Study modules as a lecturer incorporating theory and practice in aspects of performance, technique, musicality and repertoire.

Research and Professional Practice
Lee is undertaking a PhD in music at the University of Salford, focusing on the use of alternative musical resources and new methods of collaborative composition with the Adelphi Jazz/Laptop Sextet. Alongside solo performance, Lee works extensively with leading popular saxophonist Kim Cypher and jazz-funk inspired outfit KOGO in addition to theatre and corporate work including a recent performance attended by the British Prime Minister Theresa May.